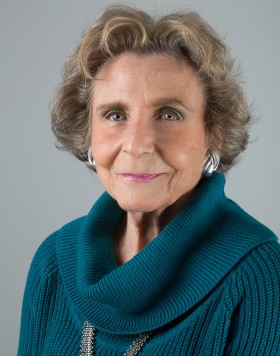 Rosanna graduated from the College of Human Ecology in 1961 receiving a BS Degree with Distinction as a Food and Nutrition major. Married to a Cornell classmate, Marshall Frank, the week after graduation, they had three children in quick succession and Rosanna followed Marshall on his overseas postings for business and was a typical homemaker of the times.

When the children reached school age and they returned to the states Rosanna was able to enter the work force, putting her Human Ecology degree to good use as a teacher of Family and Consumer Sciences at the high school and middle school levels. She became active in the New York State Education Department initiative to rewrite the curriculum for Family and Consumer Sciences at both levels. Rosanna led groups of students in the extra-curricular Family, Community, and Career Leaders of America Clubs for many years guiding them to State and National conventions and awards.

Rosanna served on the Board of the New York State Association of Family and Consumer Sciences for many years including a term as President of the Association. During her career as a teacher Rosanna earned recognition as a New York State Family and Consumer Sciences Teacher of the Year and a New York State Occupational Education Teacher of the Year. She represented the profession at many state and national conferences and lobbied on behalf of education in both Albany and Washington, DC.

After her retirement from teaching Rosanna embarked on a second career as a dedicated Cornell volunteer. She was elected to the Board of the HEAA eventually rising to the position of President and has been an emeritus member for more than 15 years. She has served and/or continues membership in many of the volunteer organizations that are part of the lifeblood of Cornell – University Council, PCCW, CAAAN, Class Council of 1961, Reunion Co-Chair, Cornell Club of Westchester County, etc. She has represented the HEAA and the College on the Committee for Alumni Trustee Nominations and the Cornell Alumni Association.

Rosanna’s daughter Erica is a Cornell alum and now Rosanna has a grandchild at Cornell with hopefully more to follow. When not volunteering for Cornell, Rosanna serves as a guide and docent for the Rockefeller estate and art collection in Sleepy Hollow for the Historic Hudson Valley organization. Rosanna and Marshall live in Chappaqua, New York.