The CMRIF is approximately a 3000 sq ft state-of-the-art imaging facility equipped with a GE Discovery MR750 3.0T MRI scanner supported by Cornell University-wide, Cornell University College of Human Ecology, and WCM Department of Radiology resources dedicated to scientific research. The CMRIF has an animal specific preparation, induction and recovery room in addition to a computer lab, office space for permanent and guest/visiting faculty, a conference area for meetings, and a hardware room to build MRI coils.  The CMRIF is equipped with full anesthesia equipment for inhalant and intravenous anesthetic administration, with equipment to monitor all major vital signs.  The CMRIF has access to multiple RF coils suitable for canine imaging. It provides noninvasive imaging with high signal-to-noise ratio and spatial resolution for anatomic and functional investigations of a wide range of specimens including animal, humans, plants and biomedical materials. The MRI scanner is equipped with the state-of-art advanced technologies including but not limited to the 32-channel receivers, a high performance whole-body gradient capable of 50 mT/m peak amplitude and 200 T/m/s slew rate on each axis simultaneously, parallel-imaging capability, optical RF technology engineered to increase signal clarity and maximize signal intensity, and a volume-reconstruction engine that enables real-time image generation. The CMRIF utilizes an enterprise cloud-PACS storage system, Ambra, that allows investigator-specific secure access to study data.  The CMRIF has 8 computers which includes 2 high powered 40-core workstations/servers.

Equipment for Neuroimaging and Analysis

GE Discovery MR750 3.0T MRI scanner equipped with the state-of-art advanced technologies including but not limited to the 32-channel receivers, a high performance whole-body gradient capable of 50 mT/m peak amplitude and 200 T/m/s slew rate on each axis simultaneously, parallel-imaging capability, optical RF technology engineered to increase signal clarity and maximize signal intensity, and a volume-reconstruction engine that enables real-time image generation. The CMRIF is equipped with full anesthesia equipment for inhalant and intravenous anesthetic administration, with equipment to monitor all major vital signs.

The MVR facility is located on the ground floor of Martha Van Rensselaer (MVR) East Hall, G301.MVR Hall is currently under construction and access to the facility is limited to MVR east. The MRI facility has Cornell key card access however guests and research participants can be escorted into the facility by authorized personnel. All authorized key card access personnel have completed the required training components. Parking in the underground Forrest Home Garage is available for research participants. Additional pay parking can be found in the outdoor lot across from the Forrest Home Garage off of Forrest Home Drive. 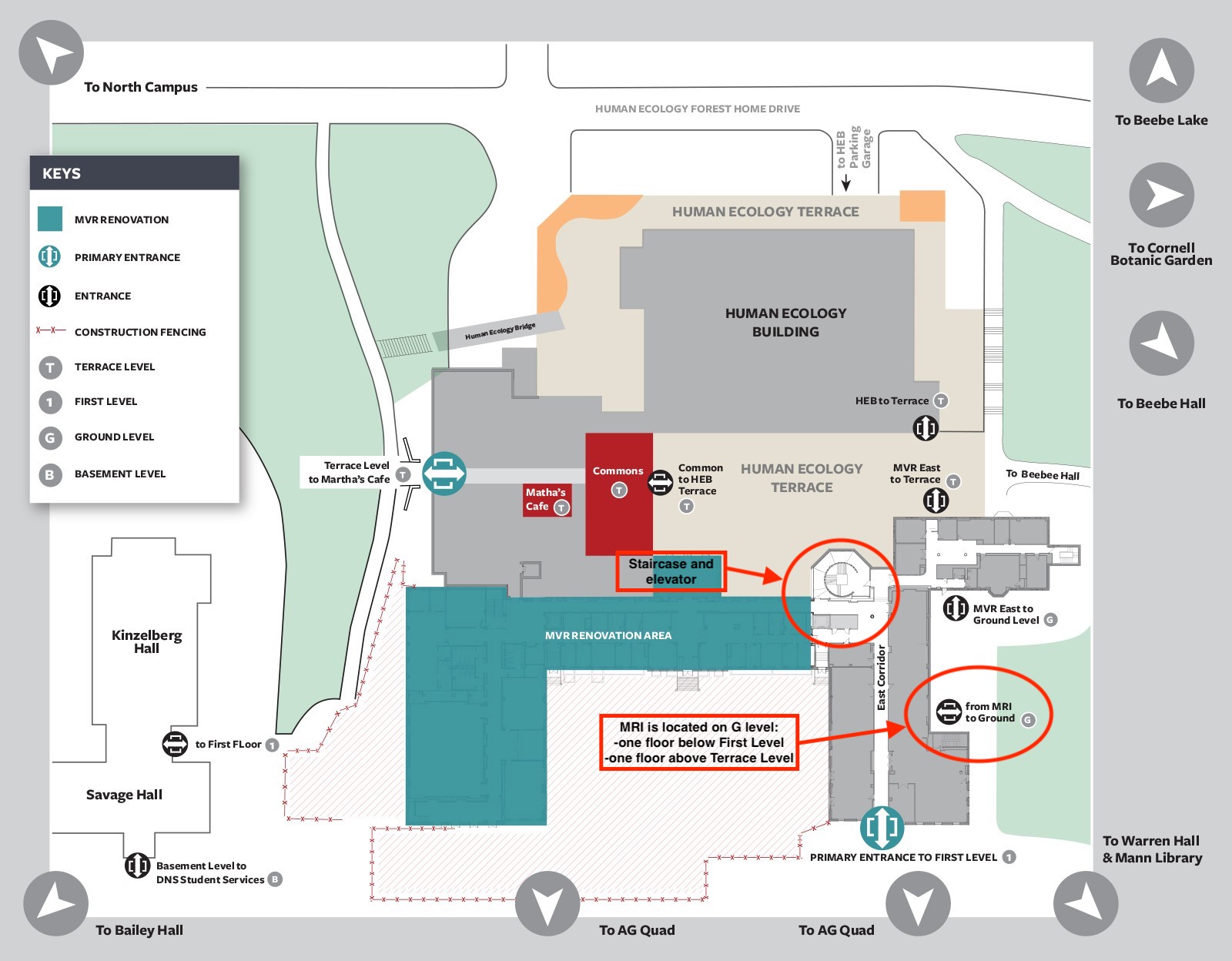 Head towards the east side of MVR, go past the door marked MRI facility (this door is only accessible with Cornell card access). You will see a side door enter the side door and then the door on the right leads to the interior glass door that is marked Cornell MRI facility.

From the Forest Home Parking Garage:

On the first level (1L) of the Forrest home underground parking garage you will find two sets of elevators. Take the elevator that is central to the parking garage and has two entrances to the “T” Level, you are now in the Human Ecology Building.  Exit the elevator and turn left to follow the hallway until you reach a door that takes you outside to the courtyard. Walk through the courtyard and turn right to the entrance that is pointing towards East MVR. Once in East MVR turn right and go up the stairs to the ground floor, make a right and follow the hallway to the end. On the left you should see a glass door marked Cornell MRI facility. 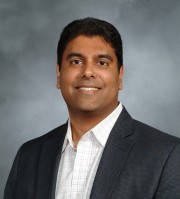 Dr. Niogi was appointed Director of the CMRIF in 2019 tasked to revamp the facility and overhaul operations so that the CMRIF can better serve the Cornell community.  Dr. Niogi has operational and strategic oversight over the CMRIF and is responsible for facility operations, staff, equipment, and strategy.  Part of this role includes faculty outreach and working with the Cornell community to see that the CMRIF adapts to serve as a valuable resource to further research.  Dr. Niogi hopes that the CMRIF can serve as a focal point to help bridge the Weill Cornell and Cornell Ithaca campuses due to the tremendous faculty expertise and interest in MRI research that spans across both campuses. Dr. Niogi serves as the CMRIF MR Medical Doctor (MRMD) for MR safety.

Dr. Niogi maintains a research laboratory at Weill Cornell Medicine and mentors students at both campuses as well. His research is focused on elucidating the role of white matter connectivity and white matter integrity in cognition through the use of advanced MR imaging such as quantitative diffusion imaging.  Dr. Niogi has a particular interest in traumatic brain injury (TBI) and serves on multiple national and international committees on TBI policy, clinical management, and research. Dr. Niogi also has research projects in brain tumor radiomics, Alzheimer’s disease, Parkinson’s Disease, and other neurodegenerative conditions.  Recently, Dr. Niogi has been applying machine learning and developing cloud computing pipelines to rapidly investigate large research datasets.

Henning U. Voss, Ph.D., received his PhD in physics from the University of Potsdam, Germany, in 1998. From 2000 to 2003 he was Assistant Professor at the University of Freiburg, Germany, before becoming Assistant Professor of Physics in Radiology at Weill Cornell Medical College in New York City. Dr. Voss became Associate Professor of Physics in Radiology in 2009. At the beginning of 2021, Dr. Voss became the Technical Director of the Cornell Magnetic Resonance Imaging Facility (CMRIF) at the College of Human Ecology at Cornell University in Ithaca, NY.

Dr. Voss’ role at CMRIF includes daily oversight over the MRI scanning facility and MR physics and engineering development, as well as assisting faculty investigators in utilizing the MRI scanner. He is developing operating protocols, ensuring daily operation, maintenance, and calibration of the scanner and peripheral equipment, and promoting the safe operation of the facility.   Dr. Voss serves as the CMRIF MR Safety Expert (MRSE).

Dr. Voss’ research interests include new MRI imaging contrasts and MRI radiofrequency coils. He is also interested in dynamical systems and the application of dynamical systems methods to 4D (space and time) MRI data of the brain. His present research focusses on the understanding of the aging human brain by using novel dynamical MRI contrasts to map aging-induced changes of the brain’s physical properties, such as the elasticity of its arteries. 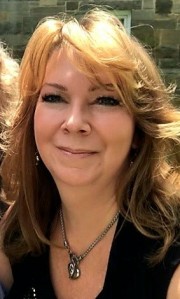 Mary Blomfield-Brown, R.T. (R) (MR) (MRSO) (ARRT) (ASRT) has been working at CMRIF since 2020 as the lead MRI Technologist. Mary’s role includes assisting faculty in building imaging protocols, troubleshooting, and help with MR scanning. Mary serves MR Safety Officer and is responsible to help maintain a safe environment for subjects and investigators to do research at CMRIF.  Mary is working to develop an MRI training program for investigators so they can learn about operating the CMRIF MRI scanner.

Mary graduated from St. James Mercy School of Radiology in 2008 as a Radiologic Technician. Mary subsequently completed a MR Cross Trainer Program with Alliance Healthcare Services and became an MR Technologist in 2009.  Mary earned certification to become a MR Safety Officer in 2019.

Mary also has tremendous clinical experience having worked in the MR mobile imaging world for over 15 years and currently maintaining a position at Upstate Bone and Joint in MRI for orthopedic surgeons that also specialize in Oncology. That facility is affiliated with Upstate University where Mary has gained tremendous experience training students and co-workers over the last ten years.