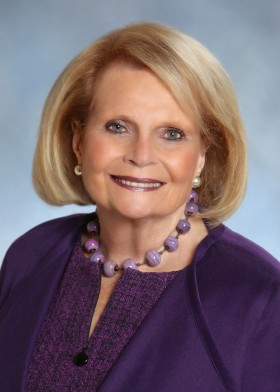 A leading member of the San Diego community, Joan Klein Jacobs has focused her energies on numerous community groups and committees such as the University of California-San Diego (UCSD). In 1970, Joan co-founded “Friends of the International Center,” a UCSD support group and is a founding partner of Gallery 8, which began at the International Center. From 1992 to 2000, she served on the UCSD Board of Overseers. In June 2000, Joan was elected to the Board of the UCSD Foundation and as Chairwoman of the Art Committee. She co-founded “Friends of the Stuart Collection,” and chair of the support group for the body of 17 world-class contemporary sculptures on the UCSD campus.

Joan has played a vital role in her contributions to the San Diego arts community. She has served on the Board of the La Jolla Playhouse since 1996 and continues to serve on its Executive and Nominating Committees. She has chaired several committees for the San Diego Symphony, where she founded and chaired the symphony’s Gold Ribbon Patrons, a group of more than 150 women who contribute $150,000 annually to the organization. Currently, she is Chair of the Board of the San Diego Symphony Endowment Foundation. Joan and Irwin were the honorary co-chairs for the symphony’s centennial celebrations in 2010. Joan also sits on the Accessions Committee of the Museum of Contemporary Art San Diego, where she also chaired the Contemporary Collectors group for the Museum. In 2001, she founded and now chairs the International Collectors – the museum’s highest support group. She continues to promote public art within the region, including through her service on the Commission for Art for the Federal Courthouse in San Diego. Joan is a dedicated member of a number of community boards and organizations as well, including the University Club, City National Bank, and the President’s Advisory Council at San Diego Hospice. She chaired the Salk Institute’s 50th Anniversary Gala in 2010.

In 1995, Joan received the David K. Kroll Leadership Award for exemplary service, dedication and commitment to the Lawrence Family Jewish Community Center of San Diego County. She was co-chair of the capital campaign for the renovation and expansion of the center, which raised $13.2 million. Joan is Vice President of the Executive Committee of the Jewish Community Foundation of San Diego County; she also serves on the foundation’s Grants Committee and chairs its Board Advancement Committee.

EDUCATION AND FAMILY Joan was born in New York City and graduated from the Barnard School for Girls, after which she received a Bachelor of Science degree from the College of Human Ecology at Cornell in 1954. She received an honorary doctorate in fine arts from the University of Massachusetts in 2008. Joan was trained as a dietician and worked for the Groton Central Schools and at Boston Lying-in Hospital (now Brigham and Women’s Hospital). In 1956, she moved to Boston where she was involved with the Boston Chapter of the League of Women Voters. She moved to La Jolla, California, in 1966. Joan is the mother of four sons and she has 11 grandchildren. She is married to Irwin Mark Jacobs, co-founder & retired CEO and chairman of the board QUALCOMM Incorporated, and pioneer and world leader of Code Division Multiple Access (CDMA) digital wireless technology.