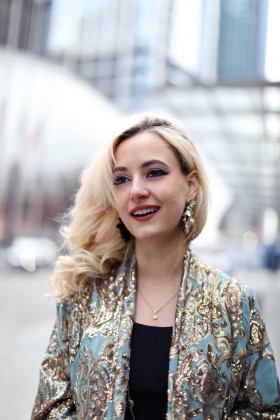 Gizelle Begler graduated from the Human Ecology Department of Fiber Science and Apparel Design in 2008. During her time here, she explored her passion for her Egyptian-American culture through design, interned with Giorgio Armani and Tommy Hilfiger, she won the outstanding student award consecutively every year and was the first Cornell student to win the YMA Fashion Scholarship Fund award. Upon graduating, Gizelle was immediately recruited to lead the design team at formalwear boutique Sugar Plum NY as the head designer. Quickly thereafter, she moved to Kuwait to explore the opulent fashion scene, and was selected to design couture for the Kuwaiti Royal family. A year later, she moved to Egypt, where she founded her fledgling company, Gizelle Couture, an eveningwear label dedicated to offering Middle Eastern women the gown of their dreams. Each gown was one-of-a-kind, personally designed for the client’s body, personality, and vision with a commitment to local sourcing, innovation, and craftsmanship. As Gizelle Couture became a premier name in evening and bridal wear across the region, Gizelle made splashing headlines in the media, from Enigma Magazine, Egypt’s #1 fashion magazine, to Marry Me, Egypt’s #1 wedding guide.  Gizelle Couture became one of the most coveted labels in the country, a namesake label among Gulf-Arab princesses, Egyptian celebrities, and all competitors in the 2011-2012 Miss Arab World Competition. A connoisseur of local sourcing, she even launched a small factory to manufacture uniforms for international organizations such as Allianz Insurance Company. In 2016, Gizelle received the heartbreaking news that her mother was diagnosed with a terminal illness and returned back to the US to care for her. It was during that time that Gizelle found herself as the Creative Director of Haute Hijab, and in just two years Gizelle has helped grow the business from a team of three to a team of thirty. Now regarded as the leading hijab brand in the nation, Gizelle has had her luxury hijab collection featured in Elle, Harper's Bazaar and Vogue. As Gizelle articulated herself, “There is currently a huge gap in the hijab space, and people don’t realize that a head-covering needs as much care, design, and consideration as a gown. A hijab is not an accessory as much as it is an extension of your wardrobe." As Creative Director, Gizelle pioneers expression, style, and empowerment for hijab-wearing women across the globe in an attempt to create a world where women can feel comfortable and confident in their hijab.