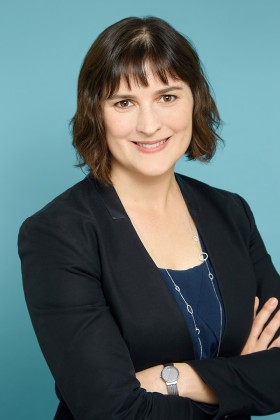 Sandra Fluke, a 2003 graduate from the College of Human Ecology, found her passion for advocacy while at Cornell and still has her “I Stand With CWRC” sign from the rallies she joined her first year, opposing the defunding of the Cornell Women’s Resource Center. Sandra’s years at Cornell provided the springboard for her career in public interest advocacy for numerous social justice causes.

An interdepartmental major, Sandra studied in the Feminist, Gender & Sexuality Studies Program and the Department of Policy Analysis and Management, where she would later become a teaching assistant for a Human Sexuality course. While at Cornell, Sandra organized a teach-in against the Iraq war, focusing on the impact on women in conflict zones. She was treasurer of the Society for Human Resource Management, on the National Dean’s List and Cornell Dean’s List, co-chair of Take Back The Night, a manager at a survey research facility in the College of Industrial & Labor Relations, and a member of the National Society of Collegiate Scholars, Sexual Assault and Violence Educators (SAVE), Cornell Democrats, and the Student Assembly Committee on Women’s Issues.

Her very first act of reproductive justice advocacy was organizing a counter-protest with Students Acting for Gender Equality (SAGE) against a very graphic and anti-choice group that was brought to Cornell’s campus. She would go on to become president of SAGE. After Cornell, Sandra graduated cum laude from Georgetown University Law Center as a Public Interest Law Scholar with a Certificate in Refugee and Humanitarian Emergencies. She has devoted her career to public interest advocacy for social justice causes, such as gender equality, LGBTQIA+ rights and criminal justice reform, and minimum wage and higher education reform. She also represents victims of human trafficking and domestic violence, as well as immigration clients.

Sandra came to national attention when she testified before members of Congress regarding insurance coverage for birth control and took on Rush Limbaugh and other conservative commentators. This led to a Ms. Magazine cover story and a powerful address to the Democratic National Convention in 2012. In November 2014, Sandra was a candidate for California State Senate. She is currently the California State & Western Region Director for a non-profit policy advocacy organization focused on legislation preventing climate change, increasing economic opportunity, and strengthening democracy through campaign finance reform and voter protection. A political partner with the Truman National Security Project, Sandra serves on the boards of the National Council of Jewish Women-Los Angeles and Emerge California, on the advisory boards of Equality California, West Hollywood Beverly Hills Democrats, LA Forward, Westside Family Health Center, and Hollaback, and is an Assembly District 50 representative to the Democratic Party of San Fernando Valley.

Sandra lives with her husband Adam Mutterperl, an executive producer and writer for television, and their dog Mr. President.