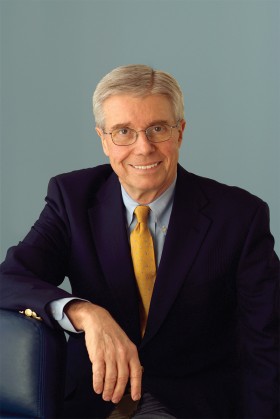 Since graduating from Cornell, Alexander (Sandy) Williams ’63 had three intertwining careers in health, wellness and medicine – involving a great many adventures, dedication, commitment, and the immense satisfaction of knowing that the work he was doing was making a difference.

The first, as a hospital administrator, began right after graduation when he joined the Peace Corps and served in Liberia, West Africa. Returning to the United States, he continued his administrator career at the Evanston Hospital in Illinois, the State University Hospital at the Downstate Medical Center in Brooklyn, the University of Michigan Hospital, the Roosevelt Hospital and its successor The St. Luke’s-Roosevelt Hospital in New York, and Episcopal Health Services on Long Island.

His second career involved association management. Early in William’s career, he worked for the American Hospital Association (AHA) in Chicago, and returned there in 1986 to the role of Deputy to the AHA President.

Finally, for his third career, Williams has been a partner in the recruiting firm of Witt Kieffer for the last 27 years. During his time at Witt Kieffer, he specialized in academic medicine, association and international searches to help institutions and organizations find the best health talent to help both individuals and populations.

Throughout his multidisciplinary career, he came to understand that the key to success was learning to work with doctors and to appreciate the medical education process – with all its warts. These lessons stemmed not only from his work in academic medical centers, but also from his multi-year involvement on the board of the Educational Commission for Foreign Medical Graduates – an experience that took Williams around the world where he was deeply involved with the arcane subject of high stakes testing.

As a Sloan student, Williams served as president of the Sloan Student Association, and following graduation, was entrenched within the Sloan community. Doug Brown, executive director of the Sloan Program often invited him back to campus to meet with students and speak at colloquiums. Through his leadership skills and interest in volunteering within the program, Williams became a member of the Sloan Alumni Association Board and then served as its president. During his time on the board, the Sloan Program found a secure a home in the College of Human Ecology.

William’s most recent, and most satisfying involvement with Sloan, was serving in an executive-in-residence role. Within this role, as one of two experienced Sloan alumni assigned to an incoming Sloan class, Williams helped prepare students for the job market over their two years in the program. During his regular campus visits, Williams mentored students by critiquing résumés, performing mock interviews, and further impacted their careers by helping identify and secure internships, as well as full-time positions, based on the unique career interests of each individual student he worked with.

Thanks to this opportunity, he understands that as good as his experience was as a student, it could never compare with the exceptional academic experience Sloan students receive today.