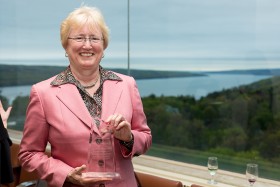 Author of the acclaimed book, Unconventional Leadership, Nancy is a highly regarded expert and accomplished speaker on strategic leadership, quality, cultural transformation, community engagement, innovation, and diversity. Over the past 31 years, Nancy has been very involved with Cornell University and the Sloan Program in Health Administration. She is a past Sloan Alumni Association President and past member of the President’s Council of Cornell Women and the Cornell University Council. She has also served as a visiting lecturer, mentor to Sloan students, and speaker at a number of University events, including the Sloan Women Leadership in Healthcare Symposium, Wagner Lecture, and Entrepreneurship at Cornell Annual Program.