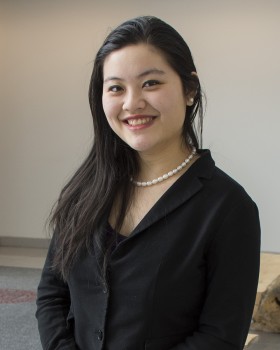 Angel Khuu ‘17 has an interdisciplinary background in Human Development, Policy Analysis and Management, and Gerontology, which led her to become sensitive to the inequalities faced by others and an agent of change. These qualities were garnered through her time and experiences in the College of Human Ecology.

Her leadership started as soon as she arrived on campus, with her excitement to experience all that Cornell had to offer. After joining the Cornell Elderly Partnership and taking several Policy Analysis and Management (PAM) courses, she chose to pursue PAM as a major along with business and gerontology minors. As a teaching assistant for Population Health and Science of Social Behavior, Angel taught topics such as cognitive dissonance and confirmation bias. She also tutored students on epidemiology models and helped them identify real setting applications.

During her years working in the Social and Cognition Lab, Angel led two projects: one studying social media portrayals, and the other on early memory in young adults. Her honors thesis, a study on “autobiographical memory,” has important implications on accurate memory processes and may help policymakers develop interventions for doctors, forensic scientists and jurors. Working with her advisor, Professor Qi Wang, Angel is one of the co-authors of a paper based on her research.

Angel’s leadership extended to the College of Human Ecology’s Honor Society, Kappa Omicron Nu (KON), where she served as Vice President of Communications/Service Management and as President. Angel initiated, developed, and managed new programs and service events to nuture talent and empower the high-achieving members of KON. In collaboration with the KON executive board, she evaluated and restructured programs to maximize student satisfaction.

Angel was also a member of Illuminations, a Chinese cultural dance troupe on campus. She served as publicity chair, choreographer and dance teacher, head instructor for children’s dance, as well as the senior advisor. Angel also volunteered within the Ithaca community for two years as a member of Cornell Health Advocacy Topics, where she worked as a mediator between the elderly and their health care providers to reduce medical problems.

In addition to the Most Outstanding Senior Award, Angel was the recipient of the Kendal Scholarship and the Class of 2017 Award.