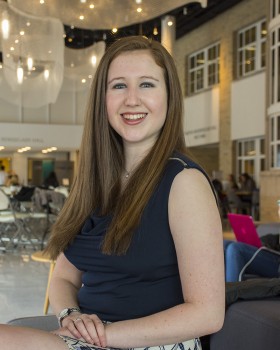 Lindsay Dower ‘17 spent her four years at Cornell working to improve the lives of both those within the College of Human Ecology and in the broader Ithaca community, truly embodying the mission of the college.

As a Human Development major and Policy Analysis and Management minor, working towards a career in health policy, she pursued coursework that allowed her to better understand the human condition in the context of healthcare. Lindsay took full advantage of the opportunities within the college to create an undergraduate experience that intertwined courses in behavioral neuroscience with those in healthcare.

She joined Professor Valerie Reyna’s lab for Rational Decision Making during her freshman year after learning about Reyna’s work in an introductory Human Development course. Further, Lindsay served as a Cornell Cooperative Extension Intern during the summer of 2014, bringing evidence-based curricula developed in the lab to middle school-aged campers at 4-H Camp Bristol Hills. Through a series of hands-on activities, she delivered an obesity prevention intervention to the campers, while completing a randomized controlled trial to test the effectiveness of the curricula.

The following year, she gratefully received a Human Ecology Alumni Association Grant to continue studying how people make decisions about their eating and exercise habits. Lindsay’s research then expanded to include a project on investigating the decision making behind medication adherence in Type I and Type II diabetics. Her passion for the projects in the lab earned Lindsay the role of Undergraduate Team Leader of the Health and Medical Decision Making Team when she was a junior. Lindsay led a group of over ten undergraduates in the lab, serving as a resource to help them engage with the material in meaningful ways.

Outside of the classroom, Lindsay was very involved with Alpha Phi Omega, a national community service fraternity with a chapter on campus. As a member of APO, Lindsay served as chair for the Loaves and Fishes project, during which she and other members volunteered to serve free, hot meals to those who needed them most in downtown Ithaca. Additionally, she played the flute in the Big Red Pep Band during her time at Cornell.