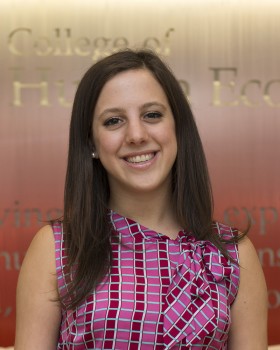 Nicole Cember ’16 truly utilized all of the resources Cornell had to offer during her four years on The Hill. Nicole, as an Early Decision applicant to Cornell, is passionate about the College of Human Ecology and her major, Fiber Science and Apparel Design. After completing a three-week business course at Cornell Summer College, Nicole decided to pursue her interest in the business side of fashion as an FSAD major with a Management/ Communications concentration and Business and Communications minors in CALS.

Although heavily involved with fashion and business, Nicole has had an amazing and unique experience with Cornell Athletics during her time at Cornell. Freshman year, Nicole was on the Women’s Varsity Rowing Team, serving as a coxswain for the C4 boat and earning a silver medal at Ivy League Championships and admission to Cornell’s 400 Club for athletes with a 4.0 or higher. During her sophomore and junior years, Nicole served as a backup goalkeeper for the Varsity Field Hockey team, earning a varsity letter during her junior year. Nicole’s biggest athletic leadership role, however, has been with the Cornell Club Field Hockey team, where she was a member for all four years and President during her senior year, leading her team to the championships for the first time in five years.

Nicole’s contributions to the Cornell community were certainly not limited to the athletic sphere; her greatest accomplishments were for the College of Human Ecology with her participation in and leadership of Careers in the Fashion Industry (CIFI). On the verge of extinction during her sophomore year, Nicole volunteered to be President of CIFI, an organization that provides students with networking, learning, and career opportunities from alumni working in the fashion industry. During her leadership, Nicole planned over 30 events with alumni and grew the CIFI membership from not just students in FSAD but to 100 members from majors and colleges all across the university. Nicole pioneered the CIFI Mentorship program, which pairs over 60 alumni working in the fashion industry with CIFI student members. Nicole’s proudest moment at Cornell was creating the Fashion Speaks Gala, a 150 person red carpet event featuring an alumni panel of speakers working in the fashion industry. Nicole’s work for CIFI has earned her FSAD Outstanding Sophomore and Junior awards and has made her so grateful for the generosity of the College and University’s alumni and for the support of the FSAD Department. Nicole additionally won a 2015 YMA-FSF Scholarship for her work on a fashion case study.

In her junior and senior years, Nicole represented Human Ecology as a Human Ecology Orientation leader. Nicole wholeheartedly looks forward to giving back to the College as an alumna.