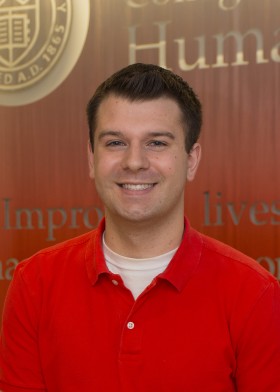 Eric Beaudette ’16 relays that the essence of the College of Human Ecology can be summed up in his very first interaction before he had even applied. He attended an information session and asked if a professor had a moment to speak with him. He was directed to Professor Susan Ashdown. They had a one hour discussion on the application of math in the fashion field. He left the campus excited and energized, and, once accepted, was able to arrange to start research the summer before his freshman year investigating the use of body scanning technology in active wear.

Eric joined the Cornell Performance Apparel Design Lab led by Professor Huiju Park where he has been a research assistant for the past three years. As a freshman, Eric collaborated with an electrical engineering lab to design and create the Destress Vest which won the Electrical Engineering Innovation award. He was able to conduct his own research on the thermal properties of seam types, which led to a research paper that won 1st place in the ITAA Best Paper Competition.

He co-founded Cornell Wearable Tech, a project team which annually designs a collection of smart garments to show at the CFC runway show. The proceedings and garments from the 2014 collection, Refraction, were accepted at the International Symposium for Wearable Computers. The 2015 collection, Irradiance, featured four illuminated outfits with audio-reactivity controlled by a microcontroller and connected together utilizing Bluetooth technology. He relays the team was grateful to receive generous grants from the Human Ecology Alumni Association to allow them to execute their vision.

As a senior Eric competed in the Geoffrey Beene Design competition. With support from Professor Anita Racine, he developed the concept of “Recycl3D”; 3-D printed custom-fit recyclable active wear. A fullscale prototype garment was made utilizing Eric’s body scan images and then was 3-D printed. For his project he received one of four National Scholarships. As a graduating Fiber Science major he plans to attend graduate school dedicated to bringing new perspectives to materials and technologies made to interact with the human body.