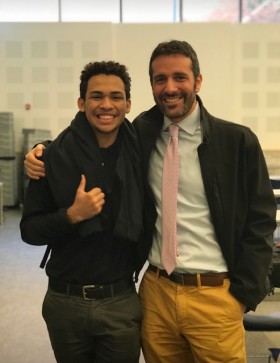 Danny (pronouns he, him, his) is the founding school leader of KIPP, the Knowledge is Power Program, Washington Heights Middle School (WHMS) in New York City.  Danny grew up on Long Island, NY and graduated from the College of Human Ecology at Cornell University in 2005 with a degree in Human Development.  Before founding KIPP WHMS, Danny taught in the Bronx as a Teach for America corps member and then joined KIPP as the 5th grade math teacher at KIPP STAR in Harlem. In 2011, as a proven leader, Danny was selected as a Fisher Fellow, a KIPP leadership program designed to prepare educators to open the doors of a new KIPP school.  He then joined an incredible team of fellow Human Ecology alumni, Silvestre Arcos ’00 and Sasha Holley ’05, to found KIPP WHMS.

Danny’s leadership and the efforts of this remarkable team achieved transformational outcomes for WHMS during their first 8 years by reaching KIPP’s 2020 academic goals early, in 2015.  From the beginning, Danny’s support and encouragement of staff led to his school’s annual surveys showing strong satisfaction from students, families and staff.  Year after year, the school's attendance and child and staff retention outpaces the district. And year after year, the school has outperformed the district in reading and math assessments.  Danny’s leadership is also evidenced in 2020 as their initial middle school class earned their high school diploma and college acceptances!

Under Danny’s guidance, KIPP Washington Heights Middle School’s excellence has been featured in publications, including the New York Times and Education Week for its work with blended learning programs and personalized instruction. Because of the WHMS model, staff from his school have presented to educational leaders across the country and entire districts have come to observe their classrooms to replicate its effective practices.

Danny is dedicated to mentorship – in leading leaders – and has resulted in five KIPP teacher leaders going on to lead at other KIPP schools in NYC, DC and Miami. His priority of staff development and inclusion is proven by his commitment to the diversity of his staff.  He has increased the number of staff who are bilingual, those of color, and those with diversity of religion and sexual orientation. Danny’s leadership ensures that teachers are supported to become school leaders themselves and represent our student and family populations.

Danny’s life work has been to build a better tomorrow for young students, their families and his staff.  He has created and leads an academic institution of excellence where “we want everyone — our teachers, students and families — to do something or learn something today that they couldn’t do or didn’t know yesterday.